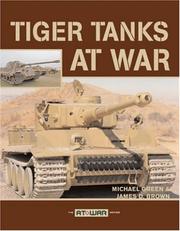 Tiger Tanks at War (At War) by Michael Green

The book “Tiger Heat: German Panzers on the Eastern Front” has a chapter about King Tiger tanks. In that chapter, the author describes an engagement between 3 King Tigers and 3 Soviet T/85s in August when the Red Army launched its Lvov–Sandomierz Offensive in Poland. And, spoiler alert, it didn’t end well for the Tigers. The armor team of Green and Brown are back again with another interesting title covering the Tiger tanks during World War II. The authors start off the discussion with the operational need that led to the development of the Tiger I and Tiger II tanks. Sink your teeth into this documentary about the most infamous tank in history. With original footage of the machine in action, this documentary tells the story of the Tiger Tank at war. Also includes an insight into unit markings, camouflage patterns and crew uniforms. THANK YOU! Summary: Tiger Tanks at War takes readers behind the scenes, reviewing the history, design and armament of the tank made to outgun its Russian counterparts. Including photographs and diagrams, this is the complete story of the Tiger tank.